December 29, 2018
SPOILER ALERT: This article may reveal a brief amount of content, context or storyline found in the music video: Someone I Used to Know.

If you follow country music, you may have heard that the Zac Brown Band recently released what some are calling an "intense" music video to accompany his new single, Someone I Used to Know.

The "intensity" that has folks all hot and bothered is an adult scene that opens the video. The commentary from folks online says they can't understand the point of a sex scene in an otherwise amazing video and therefore, most will not share it with others.

I'm not here to justify, make up your own mind. That's what art is about.
Just be an adult, listen to the message Zac Brown is sending out, which he also explains at the end of the video. Sometimes, in order to break the stigma, you need to get people's attention.

Kudos to you, ZBB

Global Statistics
Depression is the leading cause of disability worldwide. Almost 75% of people with mental disorders remain untreated in developing countries with almost 1 million people taking their lives each year. In addition, according to the World Health Organization (WHO), 1 in 13 globally suffers from anxiety. The WHO reports that anxiety disorders are the most common mental disorders worldwide with specific phobia, major depressive disorder and social phobia being the most common anxiety disorders.

Popular posts from this blog

September 22, 2017
Eight Negative Attitudes of Chronically Unhappy People “Almost all painful feelings have their source in an incorrect way of looking at reality. When you uproot erroneous views, suffering ceases." —   The Buddha, as written by Thich Nhat Hanh All of us experience negative thoughts from time to time. How we manage our negative attitudes can make the difference between confidence versus fear, hope versus despair, mastery versus victimhood, and victory versus defeat. Multiple studies have revealed how chronic negative attitudes can adversely affect one’s health, happiness and well-being. Below are eight common negative thoughts of unhappy people, excerpted from the book "How to Let Go of Negative Thoughts and Emotions.” 1.    Self-Defeating Talk Self-defeating talk are messages we send to ourselves which reduce our confidence, diminish our performance, lower our potential, and ultimately sabotage our success. Common self-defeating talk includes sentenc
Read more 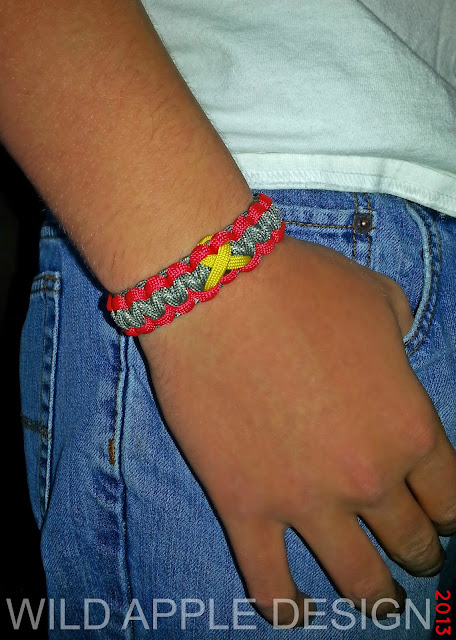 It's not too often that I get face time with my son Christopher to confer about the 550 Paracord bracelets that are available in my  Wild Apple Design  shop. He's a busy kid, with Boy Scouts, baseball, trap shooting, and his 4.0 GPA {proud mom!}. Since he makes the paracord bracelets, it's important that the two of us talk about new ideas, color combinations, new braiding techniques, etc. every once in a while. So, today was a bonus ~ My son and I had some good brainstorming on the paracord bracelets, AND you'll also get the pleasure of viewing of his right forearm in the photos below since he also served as my MODEL today! For those of you who aren't aware, we are a military family. My husband joined the Army when he was 17, was a paratrooper with the 82nd Airborne Division, and is also an Operation Iraqi Freedom veteran. In fact, my husband just finished his final drill weekend with the Minnesota National Guard three weeks ago. These paracord bracelets are m
Read more